The Founding of Present Day Fairmont

Boaz Fleming, a 29 year old Revolutionary Veteran from Delaware, was encouraged by David Morgan to relocate in this beautiful state (then part of Virginia).  In 1787 Boaz, his wife Betsy and 1 year old daughter Clarissa led a party of 43 pioneers to the mouth of Pawpaw Creek.  Many of the names are still prominent today: Fleming, Hamilton, Hutchinson,  Kratzer, Wolcott. Hudson, Pence, Dunn, and Frame.

Boaz had not intended to create a town, but a town was needed to serve as a county seat for a new county that he and others were working to establish.

In 1817 Boaz and his sons cleared off 40 acres of his  254 acres in order to establish just such a town.  William Haymond, Jr. surveyed it into 85 1/2 acre lots.  Boaz donated lots for a Presbyterian Church and for a School.  He named the streets and set up a trustee form of government.  He named his town Middletown, no doubt in honor of Middletown, Delaware where he met, courted and married his wife Betsy.

In 1820 Middletown, VA was established as a town by an act of the Virginia General Assembly (Legislature).

In 1843 Middletown was incorporated as the Borough of Fairmont.

In 1865 The trustee form of government changed to mayor and council. The first Mayor was Jacob Beeson.

In 1899 the West Virginia Legislature granted the Borough of Fairmont a new Charter by which the towns of Palatine, West Fairmont were incorporated into The City of Fairmont.

In 1913 the town of Barnsville (renamed Bellview) was incorporated into Fairmont. 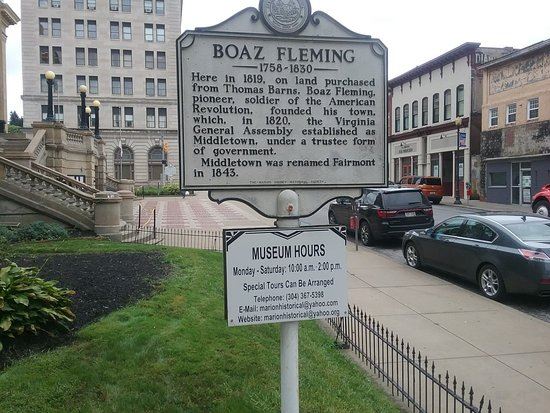